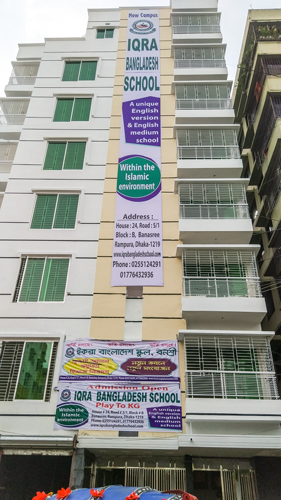 Alhamdulillah, the mission and vision of our school which was to give our children education in an Islamic environment initially started from the thought of pronounced Islamic leaders from around the world, like Fidaye Millat Sayyid Asad Madani, Mufti Syed Ahmed Palanpuri, Justice Mufti Taki Osmani and Mufti Rafi Osmani from the Indian sub-continent, Mawlana Irfan, Brother Anjum, Brother Faisal from Toronto Canada and many other Brothers from England, Australia and South Africa.

Since the past few decades many Muslim families have settled down in Europe, America and Australia for a better life and financial prosperity but at same time they were facing a serious challenge with their offspring. More than 90% of this new generation who were being raised there were not getting the traditional Islamic teachings nor were they learning its beautiful culture, rather they were being exposed to the "New Native way of life". One of the main causes for their embracing the western lifestyle was exposure to the public school system, where western and non-Islamic culture dominates our children's way of life. Beside solid Language Arts, Math, Science and Social Studies' Sex education, Homosexual rights and Music are also part of their academic curriculum. Their parents are working day and night to pay off their home mortgages, car loans, credit card bills and many other loads which mostly are all connected to (RIBA) interest another bad example for the children to learn haram from their very parents. They don't have much time to share with their children: i.e. what they are doing, where they are going, what they are watching, what they are learning and so on. Hardly, these children ever get any chance to be in the Islamic environment but are surrounded by an anti-Islamic environment all the time. Today many of our children do not have any Islamic belief or practice left with them, some of them have become atheists and in even worst-case many of them have become anti-Islamic.

It is already too late for many individuals but now the parents and guardians are desperate, when they have no more control on their children: who only learned their rights but did not learn their parents' right, they have gone too far from the Islamic values. Many families returned to their native land to save their children but for most it's already too late, most of them have no choice but to stay back there and drown in that anti-Islamic system.

Our Islamic scholars were informed of their situation and they observed it in great depth and later on gave us suggestions and guidelines:

"Do not give your children to those hands who do not have DEEN (Islamic faith) in their life" and they also said "Build such Academic Schools within the Islamic environment where Islamic character development comes first, Islamic and Quranic education is a must and also top Academic education is guaranteed."

Today western and non-Islamic culture is winning over our children's way of life, right here in Bangladesh. We must save our new generation from the western non-Islamic aggression and in the same time save them from the so called Islam "Fitnah in the name of Islam" around us. We want our new generation to become scientists, doctors, engineers, IT experts and so on but they have to be "good Muslims and good citizens first." We must remember ""Our complete success in complete DEEN"."

We are one of the unique English medium schools in Bangladesh, offering English Language Arts, Science & Technology based on the Ontario, Provincial curriculum, Mathematic similar to South East Asian curriculum (Singapore, Malaysia and China) as we have found them to of a higher standard, Islamic Studies based on the South African English version curriculum (Darululoom Deobandi Nesab) and Bangla, Social Studies based on the Bangladeshi national curriculum. At a gist we have tried to bring together the highest standard from all subjects so that or children can only get the very best as they deserve.

Our principal of Iqra Bangladesh School, Banasree, Rampura Brother Mizan, is a highly accomplished and regarded Canadian Principal with experience at all levels: elementary, middle years and high school. He has completed his high school, Grade 12 diploma from Grate Montreal High School, Montreal, Quebec, Canada and BSc in Electronics Engineering Technology from Chigo, Illinois, USA. He worked as teacher and as principal in different Canadian schools for more than a decade.

Alhamdulillah, the mission and vision of our school is to give our children education in an Islamic environment. This vision was initially started from the thoughts of pronounced Islamic leaders from around the world, like Fidaye Millat Sayyid Asad Madani, Mufti Syed Ahmed Palanpuri, Mufti Azam Taki Osmani and Rafi Osmani from the Indian sub-continent, Mawlana Irfan, Brother Anjum, Brother Faisal from Toronto Canada and many other Brothers from England, Australia and South Africa.

We are very serious in following the guidelines as prescribed by our Islamic scholars.  Our Academic education is guaranteed to be of a unique kind in excellence and is recognized by national and international standards. Our expectations in the English language curriculum are organized into four strands based on the Ontario curriculum: Oral Communication, Reading, Writing, and Media Literacy. We have developed our own English books based on these four elements excluding from it all non-Islamic substances and at the same time adding to it: Islamic Stories Rhymes and Nasheeds based on full Islamic teachings and values. We have also developed Science & Technology books very similar to Ontario curriculum based books published in Ontario Canada, rejecting those of its theories and pictures which go against the Quran and Sunnah. Alhamdulillah, all our books for each and every grade are very carefully selected prioritizing standard quality and at the same time making sure nothing in it contradicts Quran and Sunnah.

We believe in a complete education system, which provides to physical, psychological, emotional, character and spiritual development of our child.
Our vision is to continuously improve our facilities, to build and promote ourselves as a world-class school within an Islamic environment and to further develop and implement progressive programs nationally and internationally around the world InshaAllah.